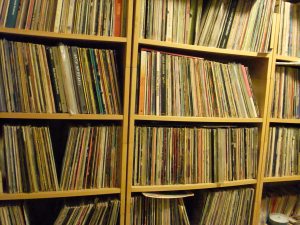 I have a lot of music.  That’s a lot of vinyl.  I have a lot in other formats as well.  And even more in my head.  But the soundtrack to my biopic could probably be pared down to two main things:  Bach’s Unaccompanied Cello Suites and the work of Bob Mould, in all his iterations.

I realized last night, as I was watching Bob perform solo, that pretty much every time I’ve ever had any real emotional moment in my life, positive or negative, my go-to guys have been him or Yo-Yo Ma.  (I can make my case about why I prefer the Yo-Yo Ma Cello version over others, but I’ll save that for another time.  You know, keep you wanting more and all.)

I’ve seen Bob Mould so many times that these days, every time I do, it’s simultaneously a new and old experience.  And I kind of like that.  After all, I’ve been through a lot with him.   Last night’s show was at City Winery.  Seeing shows there is great.  It’s intimate with good sound and has creature comforts like seats and food I can actually eat.  Civilized.

But a civilized Mould is something I’m still getting used to.   I like my rock music to hurt and countless times before, he’s hurt me like no one else.   Shows so loud that my ears would practically bleed and hurt for days.  Shows so crowded that if I were subject to panic attacks, I’d most certainly have had to have medical attention.

I had my favorite-ever rock moment during a Bob Mould situation like that.  My then-boyfriend and I were literally pressed up against the back of speaker monitor that was on stage.   The crowd was pushing further and further toward the front.   It was deafening, sweaty and magical.  In the middle of Stop Your Crying (which is a wall of sound, live) some girl spun me around, pushed me down on top of the speaker so that I was lying on my back, practically on stage.  And then she kissed me.  Just like that.  I’m talking a full-on kiss with some strange girl while the sound from the speaker reverberated through my body.  It was nuts.

And then she was gone.  My boyfriend and I just looked at each other for a second and shrugged.  Total rock moment.   And, every time we went to a show after that, he always prayed it would happen again.

Oddly enough, my second favorite-ever rock moment occurred at the distinctly non-rock event of seeing Yo-Yo Ma in a church on Park Avenue.  I was there with my faux boyfriend, Michael, who had somehow gotten tickets.  The church only held maybe a couple hundred people.  I’m not sure how he scored the seats, but he was always doing super amazing things like that, which is one reason why I had been faux dating him in the first place.

Anyway, there we were, having a truly transcendent experience.  Yo-Yo Ma.  Solo cello.  Church.   I think you might actually have to die to get more any more transcendent.  And in the middle of this beauty, an older man, dressed to the nines, sitting next to Michael, offered us hash brownies.

Um, hash brownies at a Yo-Yo Ma concert in a church?

I made Michael say no, mainly because I thought that if anyone was giving out hash brownies at a Yo-Yo Ma concert in a church, he could very well be crazy and they were probably more likely cyanide brownies.  But the guy was insistent and the room was ridiculously quiet except for the cello and his pusher-ing-ness.

While it wasn’t rock music, it was definitely a rock moment.

Ultimately, we had to eat the brownies so he’d shut up.  Plus Michael really wanted them.  Of course by the time they made it into our systems, the concert was long over.   But, turns out they were hash brownies – and amazing ones at that.

I never realized till now that my rock moments were also lessons in trust.

2 Responses to “These Important Years”